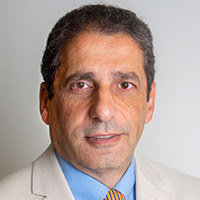 Nicolas (Nick) Choubah is the New York State Department of Transportation (NYSDOT) Acting Chief Engineer. Since July 2020 Nick has been managing the NYSDOT Engineering Division and ensuring the delivery of NYSDOT’s multi-billion-dollar capital program. Prior to this, Nick served as Regional Director for the Southern Tier and Mohawk Valley Regions, NYSDOT Regions 9 and 2, respectively. As Regional Director, Nick worked to ensure that the Department’s mission of providing a safe and efficient transportation system was implemented.

Nick began his career in 1986 with the Massachusetts Department of Public Works. In 1992, he joined NYSDOT in the Hudson Valley Region, Region 8. During his thirty-year professional career, Nick has held many critical positions including Regional Structures Engineer, Regional Traffic Engineer and Regional Design Engineer.

Nick holds a Bachelor and Masters in Civil Engineering from the University of Massachusetts, he is a licensed Professional Engineer in the states of New York and Massachusetts. .