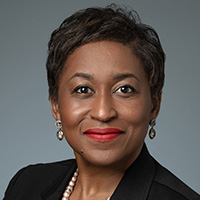 Henrika has more than 20 years of federal experience in the transportation industry including over a decade of experience as a senior executive at the Federal Transit Administration (FTA). She is known as a strategic, results oriented and customer-focused executive who strives for excellence and is committed to the successful delivery of public transportation programs, services, and capital projects throughout the nation.

Henrika most recently served as the Associate Administrator of Safety and Oversight, Chief Safety Officer, of FTA where she was responsible for establishing and implementing the federal safety regulatory framework. In that capacity, Henrika oversaw the successful certification of all state safety oversight agencies responsible for safety oversight of the 65 rail transit systems across the country and led the development and implementation of the Public Transportation Agency Safety Plan Regulation revolutionizing how transit safety is managed at transit systems. .

Over the course of her career, Henrika has frequently been recognized for her results-oriented work, receiving numerous Departmental and industry awards. For her sustained career achievements, Henrika has received the Presidential Rank Award, which is the highest honor bestowed by the President of the United States upon Senior Executives in the government. Henrika also received the Outstanding Achievement Award (Gold Medal), which is the highest honorary award of the United States Department of Transportation and has been recognized by Mass Transit Magazine for her contributions to the transit industry.

Henrika is a native of Hillsboro, AL and currently resides in Alexandria, VA. She received her bachelor’s in political science and master’s in urban and regional planning from Alabama A&M University. She received her law degree from Georgetown University Law Center.