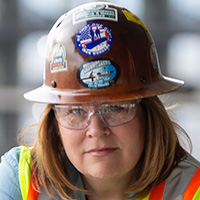 Vicki O’Leary joined the Ironworkers International in January 2016. Since that time, she became chair of the North American Building Trades Union (NABTU) Tradeswomen's Committee. She is a 30+ year member of Ironworkers Local #1 in Chicago. She completed her triple major BA degree in Union Leadership & Administration, Labor Education & Labor Studies from the National Labor College (2008) and obtained her MA from Gonzaga University in Organizational Leadership (2012). She has also graduated for the Harvard Trade Union Program (HTUP- 2018) along with Cornell's National Labor Leadership Initiative (NLLI- 2018). She passionately strives for equal opportunity for all ironworkers - one that is free from bullying, harassment, and intimidation.

Childcare historically has been perceived as a personal issue rather than a collective one. Times have changed. Every year, nearly eight million families pay nannies, daycare centers, or some other provider to watch over their children. Finding adequate care, given the hours and cycle of our industry, is terribly difficult. Even before the pandemic, inadequate childcare cost working parents $37 billion a year in lost income and employers $13 billion a year in lost productivity. Let's brainstorm together to look at long term solutions that helps owners, contractors, and construction workers.