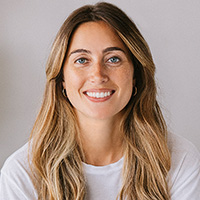 Mallorie Brodie is the CEO and Co-founder of Bridgit. Along with Lauren Lake, Mallorie co-founded Bridgit in 2014 with a simple mission: to help the construction industry maximize profits and reduce risk by taking a people-first approach. Under her leadership, the team at Bridgit has established Bridgit Bench, the company’s flagship product, as the leading workforce intelligence solution built exclusively for the construction industry. Along with being named to the Top 40 Under 40 in Canadian Construction, Forbes Manufacturing & Industry 30 Under 30, and Best Of Canada Forbes Under 30 Innovators lists, Mallorie has been instrumental to Bridgit being recognized as one of Globe and Mail’s top growing companies in Canada for three consecutive years.

The construction industry has historically been a male-dominated industry where only 9% of the total U.S. workforce is female, even less when we look at the trades. The balance is slowly shifting as groundbreaking women like you continue to challenge and break the ratio. Join Bridgit's CEO Mallorie Brodie for a discussion on what challenges you've overcome and how we can challenge the ratio for future generations.