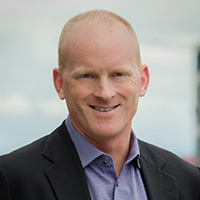 Kevin McCain is in charge of Skanska's operations in the State of Washington. He started his career in 1992 with Kiewit Construction where he worked on both heavy highway and building projects. In 1996 Kevin joined Baugh Construction which was purchased by Skanska in 2000. Kevin has worked on a diverse portfolio of projects at Skanska including hospitals, hotels, office towers, performing arts centers, retail stores, and schools. Kevin has a B.S. in construction management from the University of Washington and he is a LEED accredited professional.