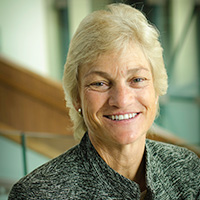 Karen Colonias has been the CEO of Simpson Manufacturing since January 2012 and in 2013 she was appointed to the board of directors. From May 2009 to January 2012, she was the chief financial officer, secretary and treasurer. Prior to that, she held the position of vice president of Simpson Manufacturing’s subsidiary, Simpson Strong-Tie Co. Inc., and in that capacity served as the branch manager of the Simpson Strong-Tie manufacturing facility in Stockton, Calif. She joined Simpson Strong-Tie in 1984 as an engineer in the research and development department, where she was responsible for the design and testing of new products and code development. In 1998, Simpson Strong-Tie promoted Karen to vice president of engineering, responsible for research and development efforts. Before joining Simpson Strong-Tie, she worked as a civil engineer for the Bechtel Corp. In 2016, she was appointed as a director of Reliance Steel and Aluminum Co. Karen has a BS in engineering and an MBA and is also a licensed professional engineer.