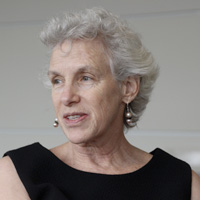 Joan C. Williams is a Distinguished Professor of Law and Founding Director of the Center for WorkLife Law at the University of California Hastings College of the Law. She has been described by the New York Times Magazine as having “something approaching rock star status” in her field. Williams’ 2014 book What Works for Women at Work (co-written with daughter Rachel Dempsey) was praised by the New York Times Book Review: “Deftly combining sociological research with a more casual narrative style, What Works for Women at Work offers unabashedly straightforward advice in a how-to primer for ambitious women.”

Williams has authored 11 books and over 100 academic articles and is one of the 10 most cited scholars in her field. Williams has studied racial and gender bias in various industries including: law, STEM, architecture, and engineering in the US and India. A study on bias in construction will launch soon.