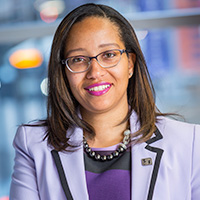 Gloria Samuel is project leader, vice president for Fifth Third Bank, responsible for the oversight and leadership of retail construction. She has been in the industry, starting as a co-op for a large general contractor, for twenty years, rising through the ranks in multiple roles.

Gloria earned her undergraduate degree in construction management and her MBA from the University of Cincinnati. She has been a leader on multiple community boards, a guest speaker at events and received multiple industry accolades, including being honored as Engineering News Record’s (ENR) Midwest Top Professional Under 40, and subsequently named one of ENR’s National Top 20 under 40 in 2018.