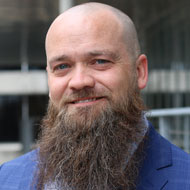 Dustin Burns has led technology adoption at McCownGordon since 2005, when most of the industry considered “construction tech” as a joke without a punchline. Over the years he has strongly advocated for tech adoption at McCownGordon and he has seen the company’s growth parallel that of the tech revolution, scaling from $50 million in 2005 to $750 million in revenue today. He has strong feelings about technology as a means for giving people tools to optimize their gifts, because, from the invention of the wheel forward, ingenuity has only found value when it improves human lives. And because he believes in that value, he drives to keep McCownGordon — and indeed our whole beloved industry — on technology’s leading edge.