Nicholas Zeman
No Comments
Los Angeles World Airports (LAWA), the owner of Los Angeles International Airport, is in the middle of a $4.1-billion capital improvement plan—one of the largest public works programs in California. A key element of the capital plan is a $438-million replacement for the airport's central utilities plant (CUP). The massive new facility has the complexity, scale and scope to present plenty of challenges for the project team. Related Links: Los Angeles World Airports Named ENR California Owner of the Year (4/19/2012) ENR California "There is something for every discipline: major operating systems, four electrical substations, miles of underground pipe and
Read More 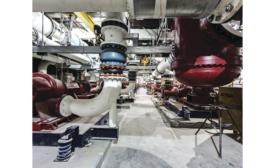 Eleve to Open with Micro Apartments and Mega Roof

Greg Aragon
No Comments
The new $34-million Eleve Lofts & Skydeck is big on ideas and luxury, yet compact and efficient. When opened next month, the 170,000-sq-ft mixed-use project will feature one of the country's largest active roof and six levels of unique "micro-apartments" targeted at the emerging 20 to 34-yr-old Generation Y crowd of young professionals. Image courtesy American Multifamily inc. The massive roof deck includes all the project's open space, from barbeques to a full dog park. Photo by Greg Aragon The project uses wood framing 65 ft above the podium, which is the maximum allowable height for bearing wood shear wall
Read More

Greg Aragon
No Comments
In 1913 the Natural History Museum of Los Angeles County opened the doors to its now-iconic Beaux Arts main building. One hundred years later, the museum is about to unveil the latest part of a seven-year, $173-million physical transformation—one that preserves the past, fortifies its existing structures and creates new spaces. Related Links: Engineering News Record Architectural Record The museum's exhibits are dedicated to preserving the past, but the team that designed and constructed the museum's original 1913 facility didn't follow such exacting standards when it came to creating as-built drawings. During the planning phase of the recent seismic upgrade
Read More

Greg Aragon
No Comments
Redwood City is celebrating the New Year with a bang—and a boom of new construction projects underway in and around its downtown.  By Greg Aragon There are currently 958 new units planned or under construction in downtown and another 1,100 near downtown Redwood City. "We’re seeing a remarkable level of developer interest in our downtown, and over the next couple of years much of this is going to come to fruition,” says Redwood City Mayor Alicia Aguirre. "It’s very positive for our community; we’re going to double the housing downtown, see new offices and new parking, and really enhance economic
Read More

No Comments
After years of legal challenges and pipe dreams, a major $984-million water desalination plant has been green-lighted for construction near San Diego. Image courtesy of Poseidon Resources The plant will be the nations largest seawater desalination plant. “This project has been a longtime coming,” says Peter MacLaggan, senior VP of development for Poseidon Resources of Carlsbad, Calif., the developer. “It’s something that the vast majority of the residents in the area have tremendous support for.”The plant, which will be the nation’s largest seawater desalination plant, was approved November 29 by the San Diego County Water Authority’s (SDCWA) Board of Directors.
Read More