When the City of Muscatine begins a construction project, every resident of the city is a stakeholder to some degree. Some may contribute to infrastructure improvements through their taxes, while others may be directly impacted by a new sidewalk or lane expansion. For the city’s project management team, it was important to find a way to keep all relevant parties informed about ongoing projects and their funding.

To manage projects and keep stakeholders informed, the team leveraged a mix of SaaS construction administration and data visualization tools. In a recent webinar, we sat down with three key members of the technology implementation team for a panel discussion on how they’ve streamlined key aspects of the data management process. The core team included:

For the city, the first step was to find something that would enable project managers and inspectors to handle projects electronically, without the delays and errors often associated with paper processes. Providing that data in transparent and widely accessible dashboards would come later. First, they needed to capture that data - and that led them to adopt Appia®, a cloud-based platform for construction administration and inspection.

“It simplifies field processes, inspectors can take tablets out to the field and enter construction data in real-time… it saves them a lot of time on the back-end,” said Lynch, when discussing some of the instant benefits they saw with Appia. Of course, instant is a relative term. The city underwent training sessions led by both Infotech and engineering consultancy Bolten & Menk at several points to prepare for the transition to digital project delivery.

After the training was complete, the city began using Appia on all DOT-funded projects. The team plans on expanding their use of Appia to all local projects to help create consistency across the board. The software has simplified pay item tracking and enabled inspectors to be more productive in the field, but perhaps the biggest benefit was in the access to vital information.

“It’s access to real-time data, getting it as it’s happening. We can answer questions right away and don’t have to dig through Excel spreadsheets,” said Lynch.

“With Bid Express, you can extract the data from Bid Express and upload that into Appia to create the project. You’ve got your items, contract time and project specifics. I can get a project ready to get in 10-15 minutes versus a couple hours from paper books,” said Cowles.

One year after the Muscatine team started using Appia, a new opportunity arose. Through a new integration, the project management team could send project information from Appia into Esri for display in intuitive and shareable dashboards. Since the integration is built into Appia, the team simply had to turn it on and start configuring their dashboards on the Esri side of things. Now, whether it’s a citizen looking for an update on a project timeline or someone in the local government checking on the budget, information is easy for anyone to access.

“Most of the time people ask about the budget and the schedule. How far are we into it? Are we under budget? All of that information is readily available in Appia,” said Yerington. “It helps people better understand the money being invested in the community and get real-time status updates and projects. And they don’t have to call Pat which frees up time for field work.”

Prior to leveraging the Appia and Esri integration, the project management team would host biweekly meetings to pull together a summary of project progress, which took time out of inspectors’ days. With Appia, all stakeholders have access to a dashboard they can check at anytime without waiting for a summary report.

Lynch, Yerington, Cowles, and the rest of their team built the first dashboard for their Grandview Downtown project, a DOT-funded revitalization effort. Because this project was managed in Appia and involved temporary road and business closures, it was the perfect guinea pig for promoting transparency through the Appia + Esri integration. 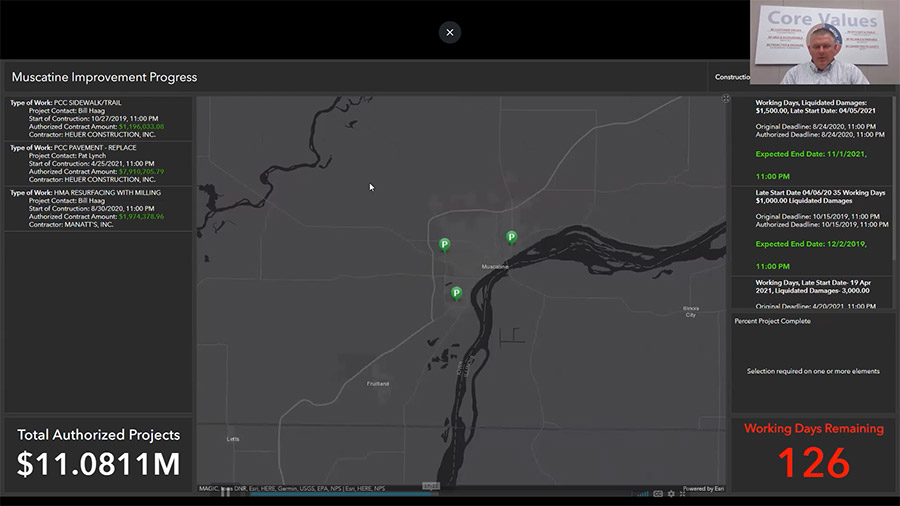 This screenshot shows an example of the information captured in Appia and displayed in Esri; the geographic area, expected completion date, remaining working days, and the total budgeted amount. In the future, the team hopes to work with Appia to add real-time current spends and cost breakdowns at a deeper level. Lynch also sees potential in creating a two-way street between Appia and Esri, where information also flows from Esri back into Appia to eliminate any possible data silo. The team will continue to increase transparency on their projects by leveraging public dashboards, powered by Appia and Esri.

To learn more about the Appia + Esri integration, visit https://www.infotechinc.com/esri-partnership/. 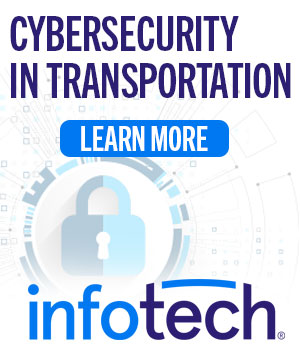