The two owners are suing their partner, Georgia Power, to halt their future outlays for the long-delayed plant expansion. The utilities adamantly disagree with Georgia Power—by about $1.2 billion—on what the estimated construction cost was set at in a critical 2018 agreement that kept the project moving forward.

The June 18 suits by utilities Oglethorpe Power, which owns a 30% share, and MEAG Power, with a 22.7% stake, are based on the agreement that provides the partners a cap option if costs exceed a certain threshold.

Oglethorpe and MEAG allege that construction costs have well exceeded the agreement's $19.2-billion threshold that triggers the right for project co-owners to freeze their capital costs in exchange for tendering a portion of their ownership in the two new nuclear units.

In a statement to ENR, Oglethorpe spokesperson Blair Romero confirmed that the utility is not exiting the project and "is deeply invested in the success of the nuclear units."

Oglethorpe announced on June 18 that it had "exercised its one-time contractual option to freeze its capital costs for the construction of Plant Vogtle Units 3 and 4," noting that the measure was "jointly agreed upon by all project co-owners in 2018." It had demanded inclusion of the cost caps in the agreement in order to support continuing construction.

In its complaint, filed in Fulton County, Ga., Superior Court, MEAG remains similarly adamant, stating, "Despite its solemn, written promise to accept increased responsibility for cost overruns over the threshold, Georgia Power has quite simply reneged."

The lawsuits channel even more uncertainty into the project, one of two new nuclear reactor projects begun years ago. Vogtle's sister project in South Carolina was abandoned in 2017. Executives of the principal utility backing that project were sentenced to prison for concealing its true conditions and costs.

As Georgia Power documented in a 2018 SEC filing related to the owner agreement, cost increases beyond the then-current $17.1-billion construction estimate would boost its share of the project from 45.7% to as much as 65.7% if costs rose by between $1.6 billion and $2.1 billion.

If the cost estimate grew by more than $2.1 billion, though, the co-owners would be able to tender an offer to give up a portion of its ownership interest to Georgia Power in exchange for the utility agreeing to pay 100% of the co-owner’s remaining share of construction costs.

At that time, Georgia Power also noted via its filing that it could cancel the project in lieu of purchasing additional ownership interest. Notably, the utility is not allowed to assign to ratepayers any costs beyond its original 45.7% project stake, and would have to absorb the additional financial impact somehow.

According to the June reports of outside project observers, the project is spending roughly $200 million per month, with the current completion dates targeting between December 2022 and March 2023 for Unit 3, and December 2023 for Unit 4. 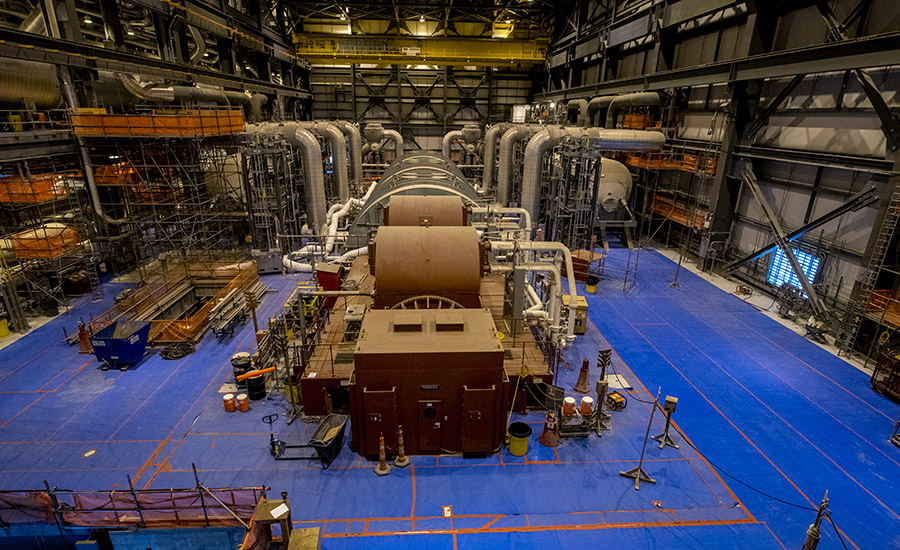 Plant Vogtle’s Unit 3, which is currently scheduled to begin commercial operation between late 2022 and March 2023, still needs to conduct testing of systems, including those of the turbine building, pictured here.
Photo courtesy Georgia Power

For its part, Georgia Power maintains that the estimated construction cost agreed to in 2018 is actually $18.38 billion, not the $17.1-billion figure.

The separate suits against Georgia Power argue that the agreed-upon cost estimate—$17.1 billion—was clear to all parties.

Oglethorpe's suit states that the estimated construction cost rose to $20.5 billion in February, with that total being "well in excess" of the $19.2-billion figure that it believes allows the co-owners to freeze their costs for future construction.

Oglethorpe further asserts that Georgia Power is continuing to bill Oglethorpe its "full 30% share (of costs) in defiance of the cost-sharing bands" included in the 2018 agreement that would prompt Georgia Power to shoulder a greater share of construction costs.

Oglethorpe estimates that it is incurring $99 million in extra costs due to Georgia Power's billing of the utility at the 30% rate, and calculates that it would save $400 million if it exercised the freeze tender option, based on current project cost estimates.

MEAG's complaint argues that Georgia Power's assertion that the 2018 construction cost estimate is $18.38 billion is "wrong," noting that "prior to the current dispute, Georgia Power never presented a cost forecast of $18.38 billion to the other co-owners."

Additionally, the two co-owners dispute Georgia Power's contention that the project's COVID-19-related costs should not be considered in the overall construction cost because they result from a force majeure event beyond anyone's control.

The 2018 agreement's use of the term "cost of construction," Oglethorpe claims in its suit, "includes all construction costs; it does not exclude costs resulting from force majeure events." 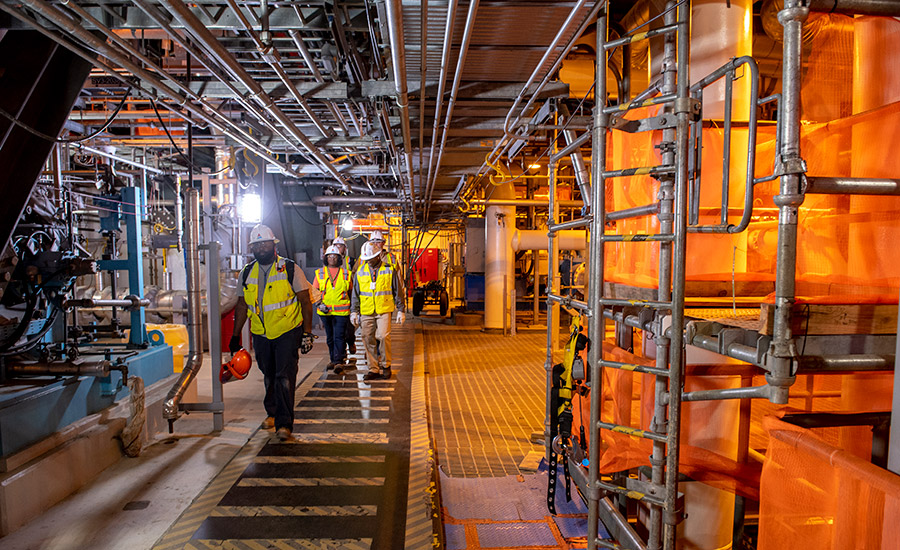 Southern Nuclear Co., which is leading the project’s construction, will eventually transfer craft and other personnel currently working at Unit 3, pictured here, to Unit 4, which is scheduled to become operational by the end of 2023.
Photo courtesy Georgia Power

Stated Jacobs: "The Unit 3 schedule continues to be extended at a rate of nearly one month of schedule slippage per calendar month of work on the unit."

Grace concurred with "a nearly 1-for-1 slip with time," adding his opinion that both Southern Nuclear Co. and Georgia Power "still have not demonstrated an ability to accurately forecast the [Unit-3] schedule."

In his testimony, Grace states that Unit 3 should be operational "by no later than the 2Q 2023, and that if lessons learned from U-3 are properly incorporated into the U-4 effort ... the U-4 COD should be achieved by the 1Q of 2024."

Jacobs testified that the project "should be able to achieve Unit 3 COD by February 2023," adding that the target "is not entirely without risk."

One future schedule risk lies ahead.

The operational testing of each new unit's secondary plant, which comprises the steam and generating components, needs to be completed. The secondary plants feature a new design that includes systems and components that have never been operated at power.

As a result, Jacobs testified: "There is a strong likelihood that equipment and design issues will be identified during the initial operation of this equipment."