Smarter Windows Will Enable Arena to Let in the Light

A  n arena currently under construction at Sacred Heart University’s campus in Fairfield, Conn., set to house its hockey and figure skating programs will have a design feature not typically associated with indoor ice rinks: windows.

“Skating arenas rarely have windows, but we’re building a venue unlike any other,” said Marc Izzo, university vice president of construction and facilities management, in a statement. Izzo called it a “new and cutting-edge experience,” enabled by the university’s decision to install View Inc.’s Smart Windows at the Martire Family Arena.

The choice was spurred by “the desire to have an innovative technology that enhanced the natural light of the arena and captured the nature of the surrounding campus,” according to Joe O’Brien, Regional Director, New England, for View.

View Smart Windows feature dynamic glass that uses an electrochromic coating to respond to external light conditions. The nanocoating reacts to an electrical charge in the glass, changing its tint in response. The level of tint applied is based off artificial intelligence and a predictive algorithm that uses data points such as the arc of the sun, weather conditions, the building’s orientation and its surroundings.

“If the building were to have traditional glass, the heat gain from the sun penetrating the space would create poor ice conditions,” says O’Brien. Instead, View Smart Windows “automatically adjust to the sun to limit the amount of heat that enters the building while maintaining natural light and views of the outdoors.” 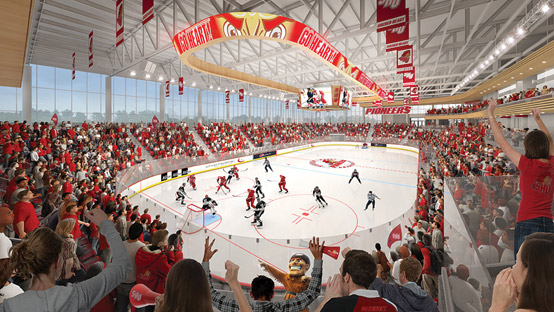 Smart Windows will be installed in the new arena, scheduled for completion in early 2023.
Image courtesy of View

The window’s tinting capabilities, adds O’Brien, “entirely eliminate the need for interior and exterior shading.” In addition to automatic adjustments, the windows, individually or as a group, can also be controlled manually through a mobile app that links up to control panels embedded in the wall.

View Smart Window installations are capable of up to a 20% reduction in HVAC energy consumption and 23% peak load reduction when compared to Low–E glass, according to a company analysis across different climate zones.

The $70-million, 122,580-sq-ft Martire Family Arena broke ground on March 15. The windows will be installed in 2022.  The arena is expected to be complete in January 2023. JLG Architects and S/L/A/M Collaborative are lead designers on the project.

In addition to serving as a home for the university’s NCAA Division I men’s and women’s hockey teams, club teams and figure skating team, the facility will also serve as a learning lab for the university’s hospitality, sports communication and media, sport management and marketing disciplines.

Will a Smarter Grid Help in Extreme Weather Events?