This website requires certain cookies to work and uses other cookies to help you have the best experience. By visiting this website, certain cookies have already been set, which you may delete and block. By closing this message or continuing to use our site, you agree to the use of cookies. Visit our updated privacy and cookie policy to learn more.
Home » ENR Southwest's Project of the Year: Temporary COVID Care Facility Built in a Reno Parking Garage
ProjectsSouthwestSouthwest Construction ProjectsBest Projects2021
Best Projects

There was no doubt about it; COVID-19 was on the way. In March 2020, with pandemic patient counts already surging across the country, Reno-based Renown Health knew the capacity of its existing hospitals could only be stretched so far. To handle the anticipated overflow without compromising the quality of care, an additional alternative care site (ACS) needed to be established—and quickly.

“We had never considered using the garage for something like this,” says Chris Baker, Renown Health’s director of facilities engineering. Yet adapting the facility made sense, given its proximity to hospital resources—labs, pharmacy, imaging, food services and other critical services.

“It would also help with managing staffing, something that would be very important as the pandemic unfolded,” Baker adds.

Thus began a 10-day sprint to transform the garage’s bottom two levels into a safe, fully functional 182,000-sq-ft care facility that could serve up to 1,400 COVID-19 patients.

Jarrett Rosenau, president of Clark/Sullivan Construction, says the challenges of a hyper-accelerated project were more than offset by the extensive experience that project team members had working with each other, both at Renown and on other projects in northern Nevada.

“We had good relationships with trades, designers, so we were able to pull together a good team quickly,” he says. “Once we learned what Renown needed, we could move quickly to put together a game plan.”

But while the ACS build-out was fundamentally straightforward, the team had few models to draw on to meet Renown Health’s strict requirements.

“We had never done anything like this before,” says Karen Purcell, president and CEO of Reno-based PK Electrical Inc., which led design of the ACS. “It was definitely a unique project.” 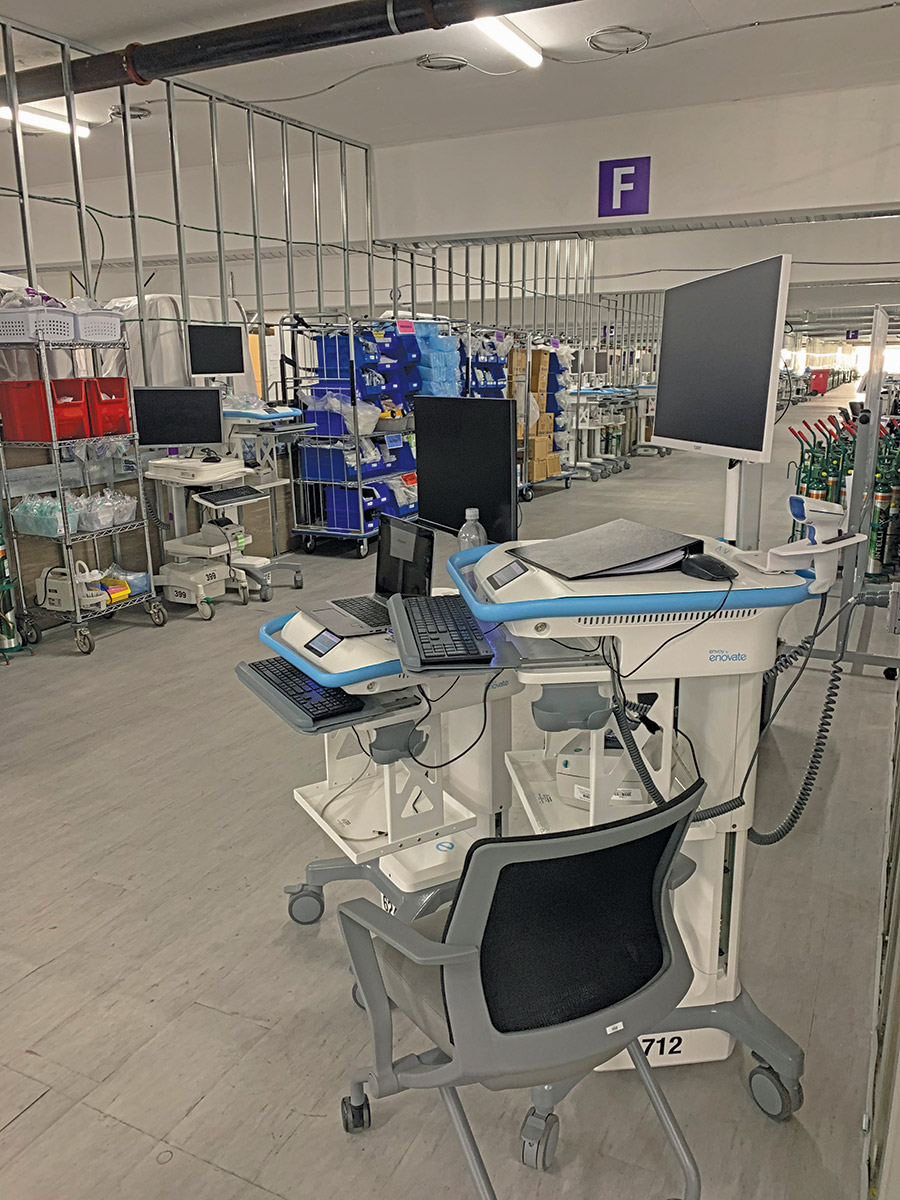 A mobile nurse station is ready for use. Given the limited nature of the existing power distribution system, new critical power feeds were extended from the nearby central utility plant. New electrical closets were established on each floor for patient bed locations, nurse support areas and telecom equipment.
Photo courtesy of Renown Health

To prepare garage floors for the conversion, Curtis Bros. Construction stripped, washed, steam cleaned and painted the surfaces to create as clean a base environment as possible. General Contractor Clark/Sullivan Construction then stepped in with more than 100 workers tasked with enclosing and weatherproofing the ACS by crafting approximately 125 fireproof frames using fire-retardant-treated 2 by 4s and reinforced fire-rated plastic sheeting. The frames were then caulked to the garage’s concrete openings while crews installed vinyl planked flooring to create a safe work surface for physicians and caregivers. 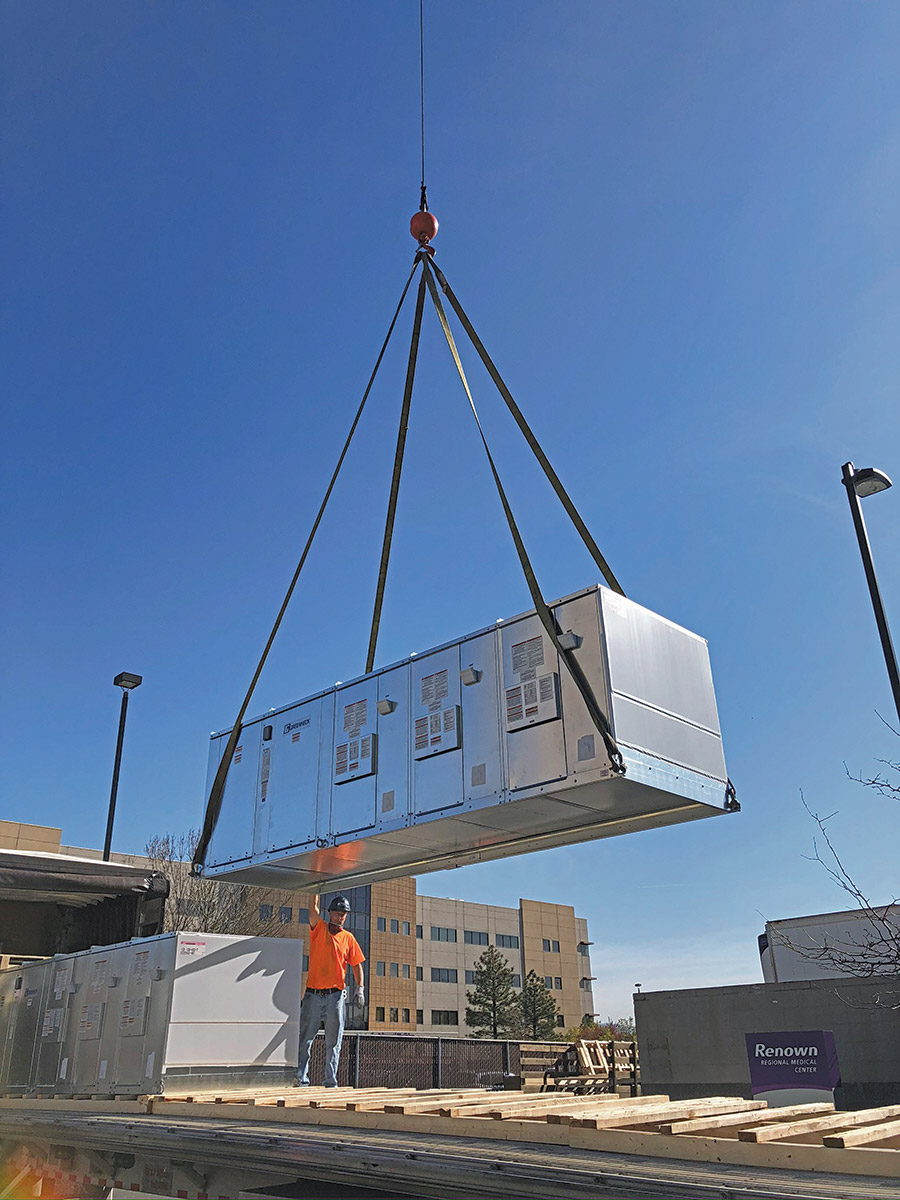 The team added approximately 1,800 LED lighting fixtures across the two floors to provide an illuminated environment suitable for patient triage and examination. The task required steady communication with vendors to procure fixtures that were in stock and could be delivered on site within 48 hours.

The ACS also needed a hospital-quality HVAC system capable not only of maintaining an indoor temperature of 70 degrees amid the high desert’s temperature extremes, but also of supplying negative air pressure to prevent the spread of COVID-19. Ainsworth Associates Mechanical Engineers designed the critical system, while Greenheck Fan Corp. created what would become the country’s largest freestanding negative-pressure facility.

A fleet of six trucks with tandem drivers made the nearly 2,000-mile delivery from Greenheck’s central Wisconsin manufacturing facility to Reno so that the HVAC components could be installed as quickly as possible.

Other infrastructure for the ACS included new redundant water heaters, prefabricated restroom skids and a beefed-up communications system that included data outlets throughout the patient care areas and Wi-Fi for nursing staff and clinicians. New fiber optic infrastructure was provided, along with telecommunications closets on each floor that allowed for station cable to be distributed to all locations. 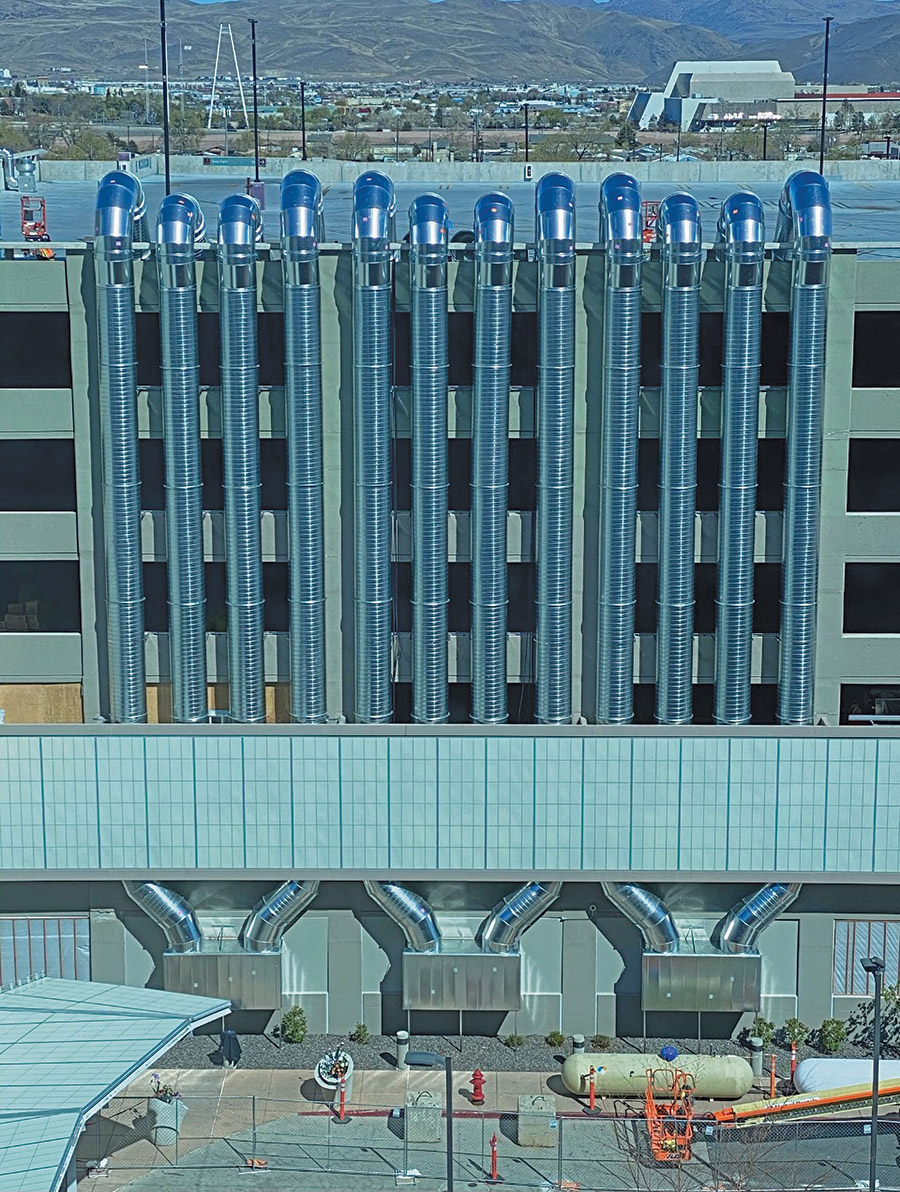 The HVAC system helped the project team achieve and maintain a temperature of 70 degrees internally—made more difficult by the site’s location in a high desert climate where below-freezing temperatures can last for weeks during winter months.
Photo courtesy of Renown Health

Safety, always a priority at even the most routine construction sites, took on added dimensions at the Renown Health ACS. Along with safely synchronizing the bustle of activity during the 24/7 construction, Clark/Sullivan increased the frequency of its interaction with tradespeople, including a meeting at the start of every shift. The team reviewed the work underway and addressed specific items of concern from a safety perspective.

In addition, each shift had a designated safety officer responsible for working with trades and other subcontractors to ensure that components were being installed safely. With the fast-paced project producing a constant stream of debris and loose materials, a full-time tradesperson was assigned to oversee jobsite cleanup, including eliminating potential trip hazards. 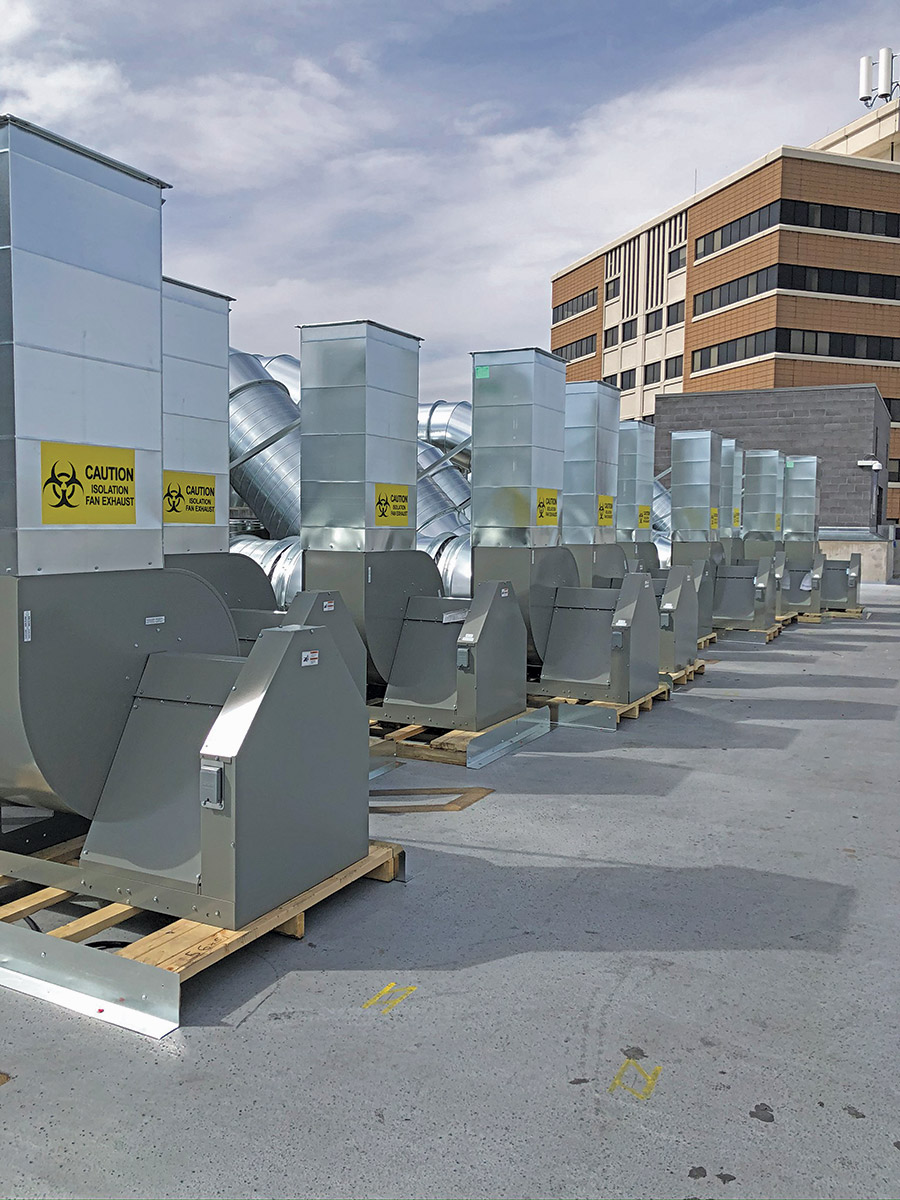 The added attention to safety paid off. The project team logged more than 20,000 work hours with no recordable incidents, lost-time injuries or positive COVID tests.

On April 3, on schedule and at a final cost of $11 million, the ACS was fully equipped and ready to begin treating patients. Although its full capacity was never needed, the facility nevertheless played a key role in helping Renown Health keep pace as COVID-19’s effects on the community fluctuated. In November 2020, for example, Renown used the ACS to serve hospitalized patients who were diagnosed with COVID-19 and were clinically stable or improving.

The last of hundreds of patients left the ACS in May, and with COVID-19 case counts in the area stabilizing, Renown Health gradually decommissioned the facility. 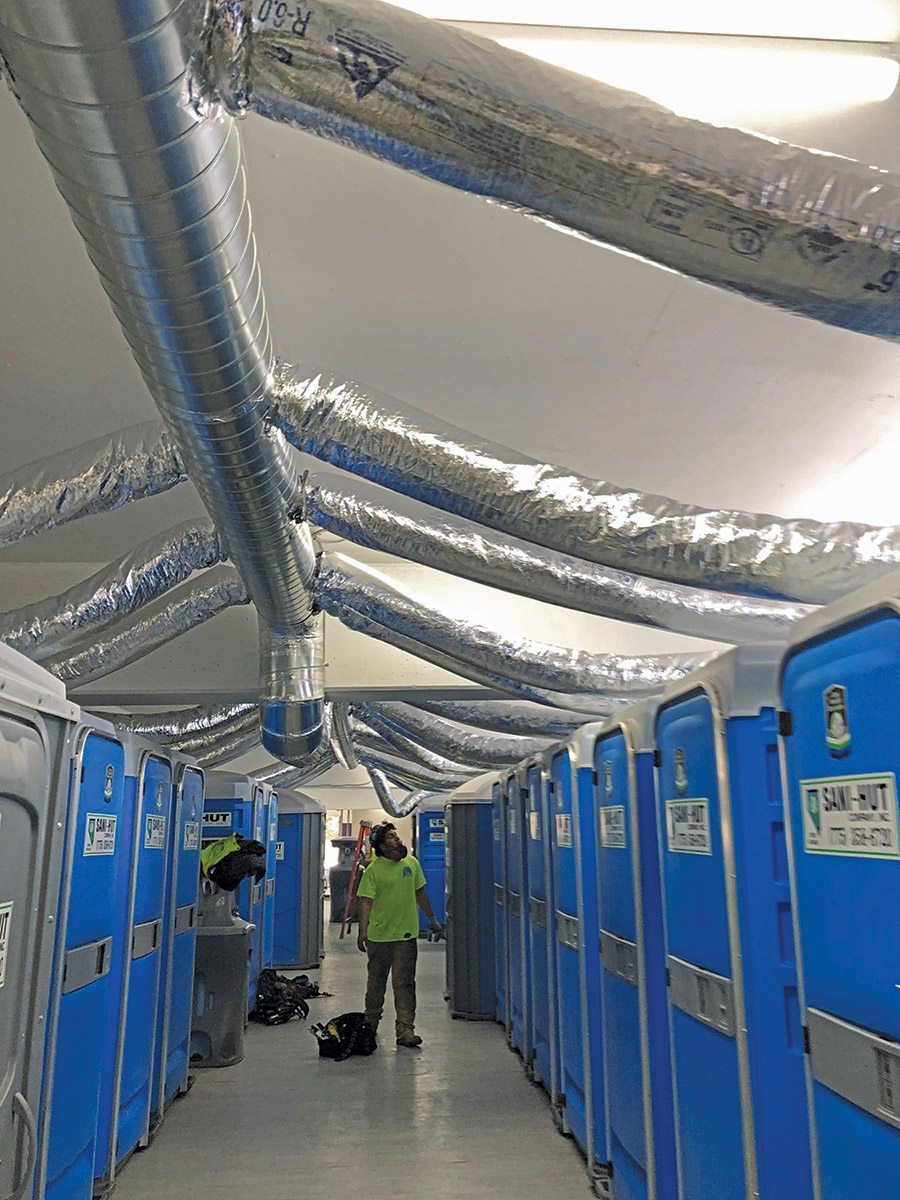 Even though vehicles once again occupy the spaces that just a year ago were filled with patient beds, Baker says the legacy and best practices of the ACS will live on, particularly if a similar public health emergency arises.

“It definitely opens up your field of vision on possibilities when you align with the right people and take away roadblocks from the scope of work,” he says, adding that it took “a community-wide effort among all contractors to drop what they were doing and mobilize skilled workers and engineers to do this.”

Rosenau agrees. “Everybody was in alignment because they recognized the importance of the project to the community and wanted to get it done,” he says. “It was a great, exciting experience, though I hope we never have another emergency where we have to do something like this again.”

But if a similar situation does arise, Purcell says the area’s engineering and construction community will be ready. “It shows that given the right team environment, we can do anything.”

MetroSouth Hospital Was Revived as a COVID-19 Alternate Care Facility