This website requires certain cookies to work and uses other cookies to help you have the best experience. By visiting this website, certain cookies have already been set, which you may delete and block. By closing this message or continuing to use our site, you agree to the use of cookies. Visit our updated privacy and cookie policy to learn more.
Home » Challenges Drive Solutions at Phoenix Mayo Clinic Expansion
SouthwestSouthwest Construction Projects
Digging Deeper: Arizona

Hospital expansions are rarely easy propositions. On top of the technical challenges inherent with medical facilities, nearly every facet of operations, from delicate surgical procedures to linens and other supply services, must be protected from the disruptive effects of construction. That can add up to a lot of headaches for the project team.

Not so with the Mayo Clinic’s $145-million East Side Expansion, currently underway in Phoenix. Instead of a conventional delivery approach, the project has combined elements of integrated project delivery, “big room” planning and an attitude of approaching knottier issues as opportunities for innovation. And more than a year into construction, the prognosis for a successful outcome appears extremely positive.

The 330,000-sq-ft project, which includes expansions of the clinic, the hospital and east cafeteria buildings, is part of a comprehensive campus-wide growth program aimed at boosting the Mayo Clinic’s patient capacity over the next two years. 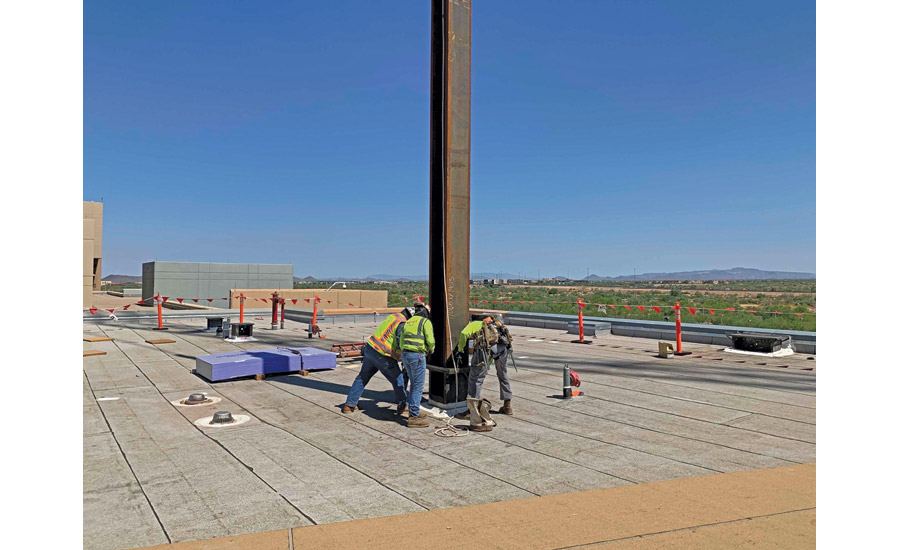 “Every time you add beds, you have to add support spaces to serve the patient population,” explains Mayo Clinic project manager Tim Carpenter. He adds that in keeping with the Mayo Clinic’s patient-first philosophy, everyone associated with the project has to accept that the reason they are there “is for the patient.”

Co-locating team members in a big room environment for a year in advance of the January 2020 start of construction helped reinforce that concept while also fostering the collaboration necessary to work out intricate design and constructibility details using lean project concepts and modeling technology. Justin Adams, senior project manager for McCarthy, which led the expansion project as construction manager at-risk, says 70% of the team’s trade partners took on design-assist roles.

Adams says the involvement of key subcontractors during the expansion’s programming phase yielded a host of efficiencies and other benefits. For example, McCarthy collaborated with the project’s steel subcontractor, structural engineer, fabricator and erector to optimize the amount of steel needed for a 236,000-sq-ft vertical expansion of the clinic building.

By adjusting connections and reducing or discarding components, the team eliminated more than 500 tons from the design—“a huge opportunity for the budget,” Adams says. He adds that design-assist also helped the team get ahead of pandemic-related procurement disruptions, with labor and materials secured before COVID-19 outbreaks shut down manufacturers and closed international borders. 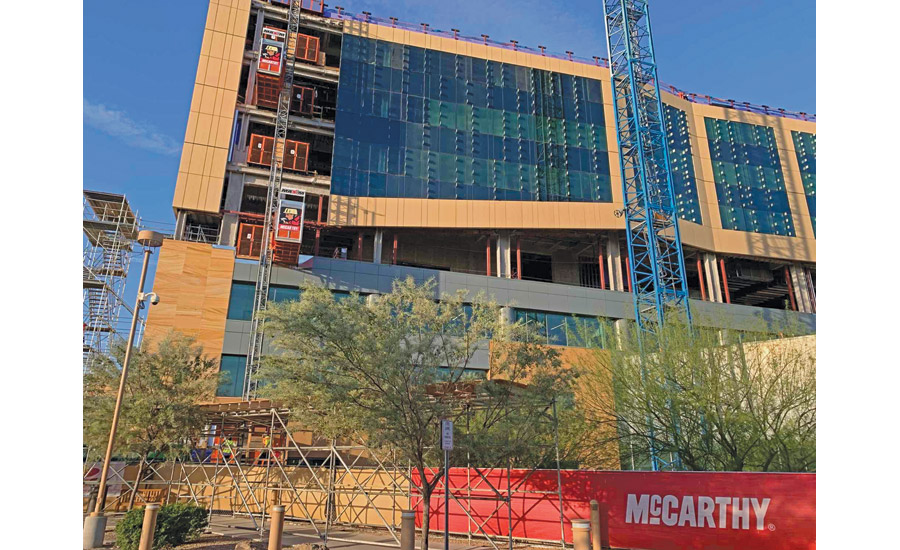 EXPEDITING ELEMENTS: Prefabrication helped accelerate many elements of the project, including panels for the clinic’s custom aluminum exterior.
Image courtesy McCarthy Building Cos.

Expanding the four-year-old clinic upward would provide plenty of other tests for the project team’s opportunity-based approach. The logistically complicated effort adds three new floors atop a full-level extension of the mechanical penthouse.

“As we work to make this project successful, we want to set up future teams for success as well.”
— Michelle Mantegna, Project Manager, Shepley Bulfinch

Although the building had been designed to accommodate additional levels, tolerance variances of existing columns would have complicated design of the expansion’s dense new floorplates.

Augmenting the original roof-level column stubs with custom cap and base plates, ranging in size from 1.5 ft by 2.5 ft to 2 ft by 3.5 ft, corrected offsets of up to 3 in., allowing the new floors to rise as designed.

To preserve the potential of more vertical expansion in the future, “we had to think of it as one holistic design incorporating both structural and systems perspectives,” says Michelle Mantegna, project manager for lead design firm Shepley Bulfinch. She adds that team has taken a lot of pride in making sure design and construction decisions have been fully documented to aid those who will literally and figuratively build on their efforts.

“As we work to make this project successful, we want to set up future teams for success as well,” Mantegna says. 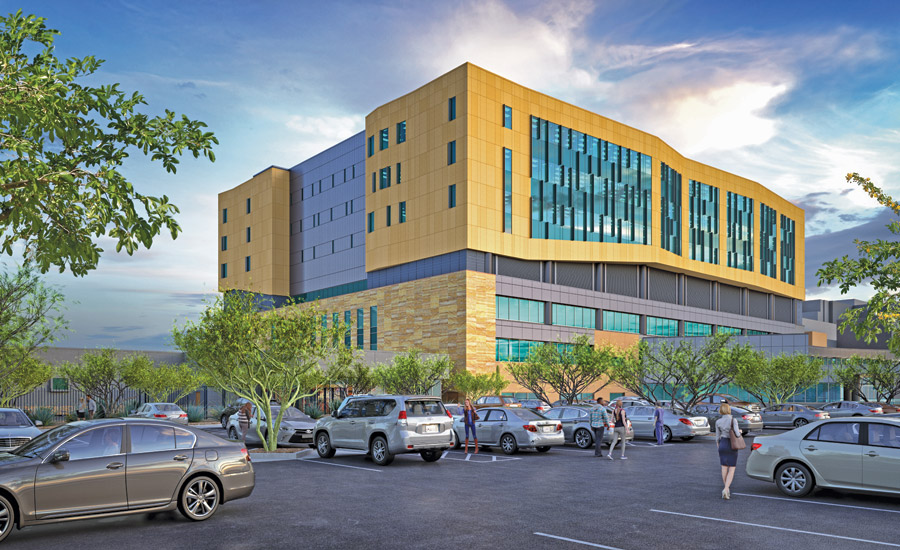 One facet of the expansion summary that’s sure to make for interesting reading will be the section dealing with “Opportunity Corner”—a section of the existing clinic’s penthouse, so named to ensure the team stayed focused on finding solutions rather than frustrations.

While extending the penthouse level to the building perimeter to accommodate future mechanical systems was relatively simple, extending vertical concrete cores for the elevator shafts required the team to expose and protect critical MEP and elevator-control equipment, all of which had to remain fully functional throughout construction to support ongoing clinic activities and procedures on the existing floors.

Opportunity Corner lived up to its name via a specific design package that safeguarded building systems and facilitated a strategy to stagger the “jumps” of elevator controls to higher floors. Carpenter credits the optimistic approach for helping to mitigate the inconveniences of occasional elevator outages on the clinic’s building staff and patients.

“Everyone knows that at the end, it’ll be a big, beautiful building,” he says. “That helped us get through it.” 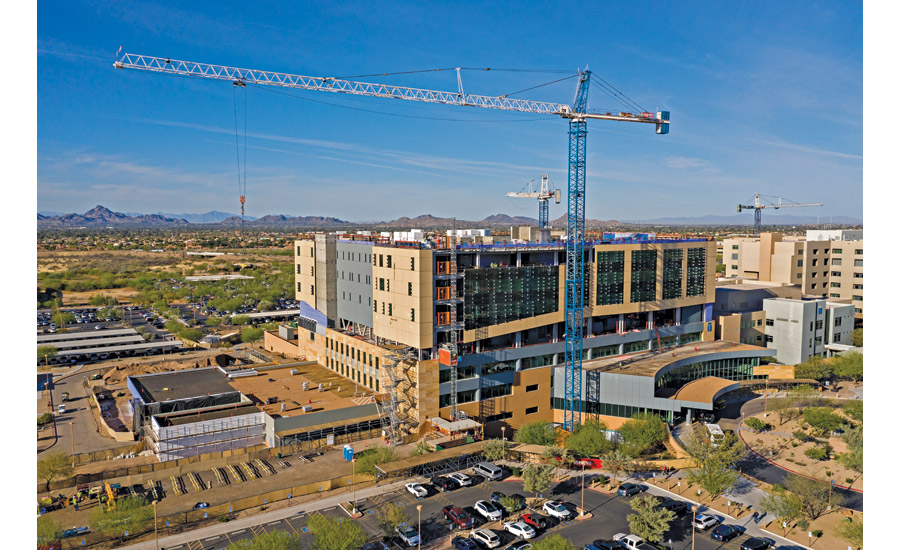 DO NO HARM: Project planning included mitigating disruptions to the Mayo Clinic’s logistical operations as well as ongoing surgery and clinical services.
Image courtesy of McCarthy Building Cos.

With the site constrained by existing structures on three sides, Adams says vibration control was a constant concern, as delicate medical procedures were taking place just a few feet from the bustle of construction activity. Unlike working atop the clinic building, “This isn’t the type of space used only during the day,” he says.

Compounding the logistical issues on the tight site were construction-phase constraints on the hospital’s main supply chain thoroughfare, with the number of loading dock bays reduced from five to two. That meant even innocuous project tasks like site fencing required a degree of flexibility to accommodate multiple trucks.

For the addition’s 20-ft-deep excavation, the team designed a shoring system to help support existing piers while a network of sensors helped ensure any construction-related interior vibration stayed within stringent limits. Rather than risk using potentially disruptive hard connections to link new and existing structures, the team designed a 1,473-linear-ft system of expansion joints to minimize risks from vibrations and compromised sterile environments.

Along with turning myriad challenges into opportunities, the big room approach also found ways to capitalize on prefabricated MEP system components for both the clinic and hospital projects. The team incorporated innovations such as pre-fitting variable air volume fans with pipe connections and using surface-mounted perioperative area headwalls to expedite installation.

“We also figured out a method to install rough-in components before walls were framed, which also helped save time and space,” Adams says. 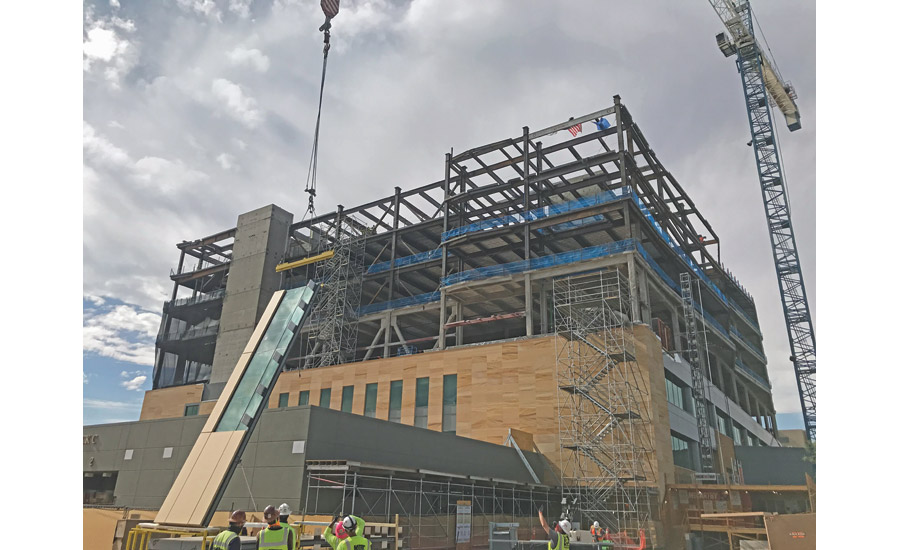 COUNTING DOWN: The hospital and cafeteria portions of the expansion wrap up this year, while the clinic is expected to reach substantial completion next summer.
Image courtesy of McCarthy Building Cos.

The biggest prefabrication achievement, though, may well be the unitized aluminum skin system for the clinic’s exterior. Incorporating a lip of the concrete slab edge on each floor allowed most of the 20-ft-tall, 10-in.-thick panels to utilize bolted connections and eliminated all but a handful of welded attachment points.

“That allowed us to use the tower cranes for installation rather than erect scaffolding around the building,” Adams says. “That whole process took about four months.”

These and other efforts have helped accelerate elements of the East Side Expansion, with the hospital addition now on track to be substantially complete in July, several months ahead of schedule.

The three-building, 6,000-sq-ft expansion to the Mayo Clinic’s east cafeteria is set to be delivered six months early, in December 2021. The clinic’s vertical expansion is scheduled to wrap up in June 2022, marking the overall project’s substantial completion. 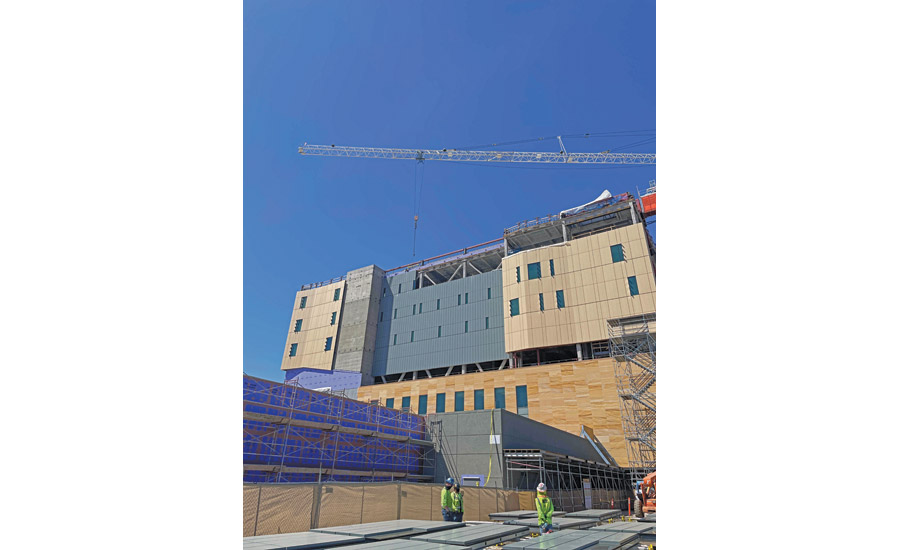 MEP IN THE MIDDLE: The logistically complicated effort adds three new floors atop a full-level extension of the mechanical penthouse.
Image courtesy McCarthy Building Cos.

With the end of the Mayo Clinic’s first big room project in sight, Carpenter has found a lot to like about the approach, even if it does take some getting used to.
“It’s a very busy room and never a dull moment,” he explains. “But from our perspective, it’ll be hard to go back to doing projects the old way.”

Adams has no doubts about the benefits of collaborative forms of project delivery.

“It really speaks a lot to the entire team on how we came together on each problem,” he says. “It’s not the designer’s problem or the contractor’s problem. It’s an opportunity for the team to solve.”