test page - do not open

If there was ever a year when you could overlook the visual drama of construction, 2020 was it. All the spray disinfecting, temperature-taking and fussing with masks; all the worries about the virus outside and inside the gates. Those are the themes that will dominate our collective memory. Face coverings became an important tool to prevent the spread of coronavirus. But for those who did not previously have to wear them as a regular part of the work day, they could be an afterthought, a style statement or—more likely—a nagging, voice-muffling, heat-trapping distraction. You could endure the patch of fabric across the bottom of your face, but you couldn’t enjoy it.

Reading eyes became a new skill. And eyes are what distinguish some of the best images submitted to ENR for its annual Year in Construction Photo contest. Minus the companionship of noses and mouths, eyes inspire speculation about what the photo subject is thinking and feeling. There’s no smile, no grimace to point the way. When the ironworker on this page stares straight through you, you imagine the accumulated angst of the pandemic building up behind the eyes. 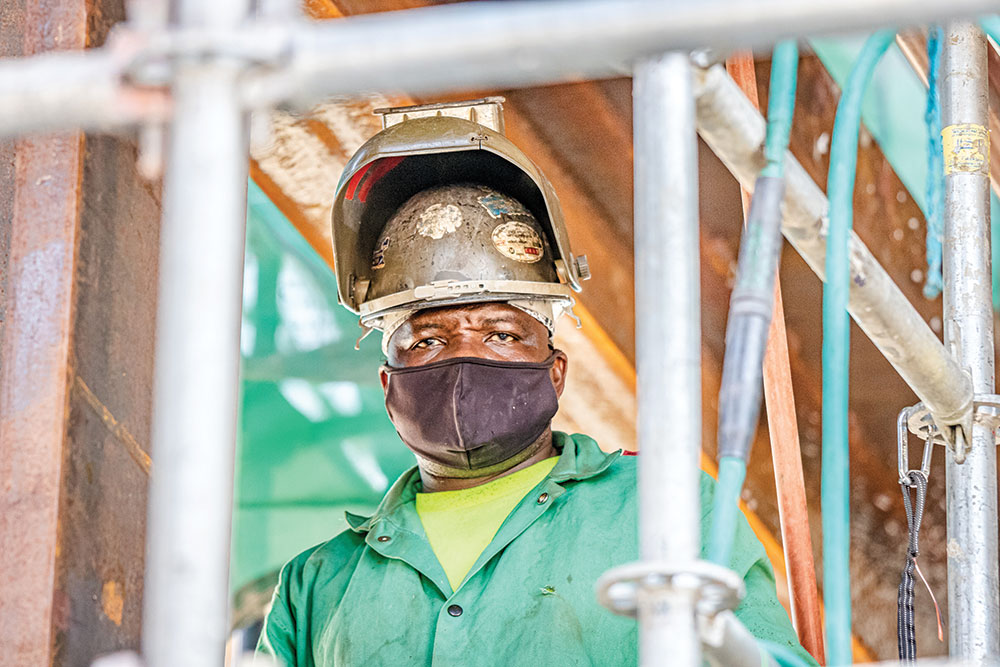 “I always hope to catch up with the people I photograph to introduce myself and share the pictures,” Garner says. She was on site to document progress at the office building project  in September when she captured this shot of John Omole. She was unable to catch him resting since he was so busy that day, “working hard welding the iron, standing on the decking above me. The colors and the welding in progress caught my eye, but at one point he looked my way and I got this shot.” Garner likes “the look of fortitude and determination in his eyes. He shows the tough exterior of the worker doing his job.” 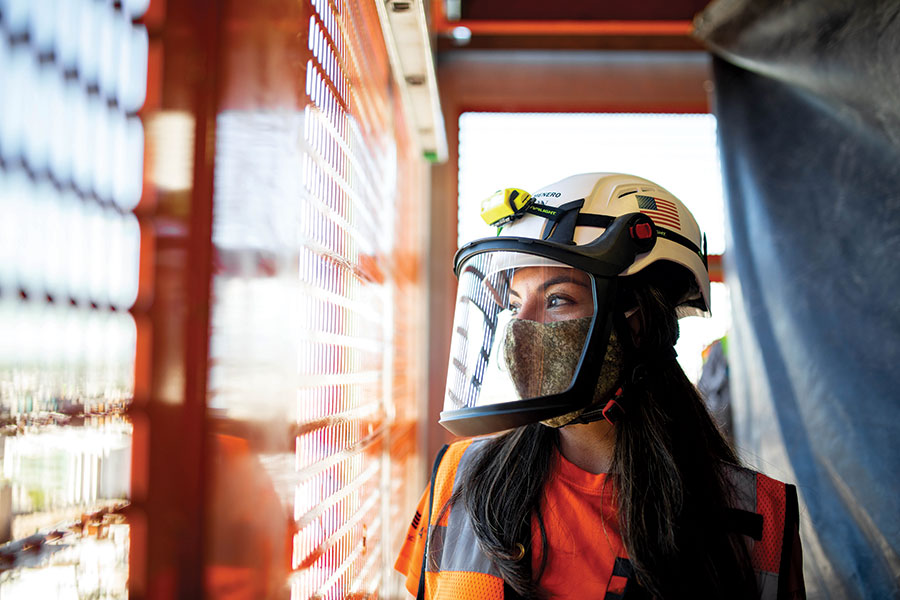 On the way up in an office  project elevator, pressed in by virus-related protective tarp, photographer and agency owner Ely Hemnes caught a Swinerton project manager,  Adelicia Colmenero, as she cast a wistful gaze outward. For Hemnes, it seemed to capture all that was hopeful about the future of women in construction and a day when COVID -19-related constraints would no longer crimp the space needed by the industry’s  up-and-coming women managers.

There’s no way to know. Is being photographed just one more headache and irritant in a year of headaches and irritants? Then there is the next photo of a woman looking out from a project elevator, and once again you can only guess if that is worry, wonderment or boredom behind her gaze.

There is little direct evidence of the pandemic in the rest of the winning images on the pages that follow, but there is a collective beauty that the images all contribute to. It’s in the splendid earth-toned soil clouds created by an explosive blast. It’s in the sunless orange sky of a California wildfire: Even destruction can be beautiful. There’s beauty in the subterranean sculpted walls of a rail tunnel. And in the light bursting through the top of a concrete box as another bucket of concrete is lowered on the crane line. In these shots, the crews are comparatively tiny daubs of yellow or orange; their safety vests are about all you can see. Yet flip ahead to the other photos, and you’ll find an audaciously unshy worker pulling aside his shirt to show you how close to his heart his union membership is, in a beautiful inked tattoo.

Every photo snatches and saves an evanescent moment. Will the two ironworkers, threading connections on the rust-powdered skyscraper steel, ever strike those poses in just the same way, in a muscular tableau, when bolting up connections on the other side of the structure? Maybe. Will the sun find them as easily? Will the worker hosing down the jobsite in another shot ever spray from exactly that strategic spot where the jobsite light and city skyscrapers array themselves behind him? Will the laborers, in still another photo, form another samba line on the concrete hose the next day? More importantly, will someone be there with a camera if they do?

In a year full of loss and emptiness, these bustling and poignant construction and engineering-related photos document the resounding victory of the human spirit, the willingness to press on with the work before us during the most troubled and heartbreaking year in memory. 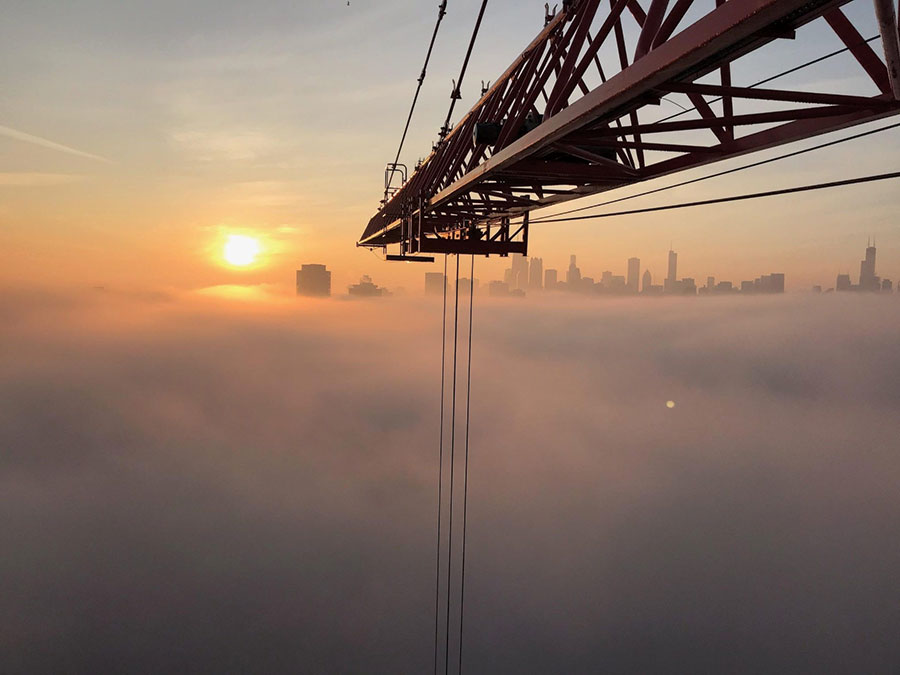 When Moffett, a 33-year operating engineer from Local 150 in Chicago, climbed 200-plus steps up a ladder to the cab of her Potain tower crane at 6:30 a.m. on Dec. 24, 2019, she realized she was above the clouds and snapped this shot with her iPhone 7. “Here comes the sun,” she says. “I just love the skyline of Chicago in the morning.” Moffett was working for specialty contractor Adjustable Forms, installing precast components as heavy as 38,000 lb and doing other concrete work at The Orchard in the city’s Lincoln Park area. The firm was a sub to Gilbane Building Co., which provided CM-at-risk services on the luxury condo. Moffett, whose father was also a crane operator, says she gets “the best real estate in the city, and I get paid to be here. I’ve got the best job in the world.”