A Primer on Technology Adoption in Construction

Why Consider Technology Adoption in Construction?

The answer at the highest level is to increase competitiveness, profits and safety. Underneath these metrics are, of course, improving construction costs, build quality, speed, design innovation, energy efficiency, scale and other measures that all impact overall competitiveness and profits. Safety plays a special role since in addition to impacting a firm’s profitability and competitiveness, there is a moral dimension as well.

Experience across many industries has provided compelling evidence that exploiting new technologies has proven a reliable way to increase competitiveness and profits. While this may answer the question of “whether” Construction firms should adopt new technology, it leaves open the question of “how” and “when.” In this article we outline the landscape of technology adoption to help gain an understanding of how and when construction firms should adopt new technologies and innovations.

As various waves of technology have transformed many industries over the past decades, we have accumulated substantial knowledge about the patterns that technology adoption takes within an industry and within an organization or group of users. These have been distilled into a number of different models that can help describe the nature of technology adoption.

The technology adoption “curve,” sometimes called innovation curve or innovation adoption lifecycle, was generalized by Everett Rogers from early models in his 1962 book, Diffusion of Innovations. In this model, technology adoption over time is described in a classic “bell curve” where each section of the curve is broken into categories of adopters with common traits.

Innovators/Technology Enthusiasts—These people are the first to try a new “cool” technology. They understand it may not be perfect, and are willing to take a risk that it may not solve their problem.

Early Adopters/Visionaries—These people are willing to try out a technology at an early state. The early adopter is making an informed decision and not using a technology for technology sake, like the innovator might. But they do not need to be taught about the value proposition. They are willing to commit the effort to try to make the new technology work.

Early Majority/Pragmatists—These are more conscious technology consumers and are looking for useful solutions but also wary of possible fads or buggy solutions. They are pragmatic and rely on hard, proven data and facts. They look for a safe purchase.

Late Majority/Conservative—These people are more skeptical and price conscious about technology and innovation and are only comfortable in adoption once a product is “mainstream”. Like Early Majority they want to see hard data on effectiveness.

Laggards/Skeptics—These people are averse to innovation and new technologies. They require a clear provable advantage tied to clear metrics to be convinced. 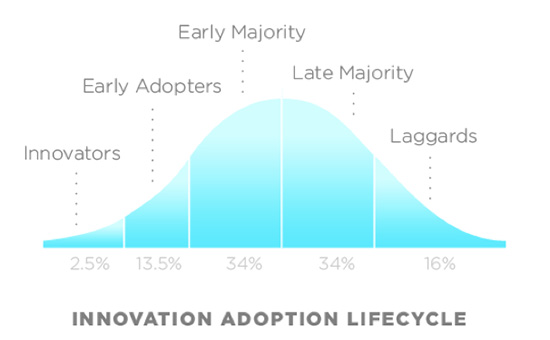 A modification of this early model was proposed by Geoffrey Moore in his seminal book Crossing the Chasm, where there is a “gap” between the early adopter and early majority groups, creating a challenge for technology adoption momentum to be maintained.

The diagram below shows how these groups and phases of adoption contribute to overall cumulative penetration of a new technology into an industry.

You can also view this adoption “timeline” through the lens of risk/reward. The earlier adopters enjoy the benefit that a particular technology adoption provides for a longer period than later adopters, but “discounted” by the risk associated with early adoption (higher costs, possibility it does not solve the problem, etc.). 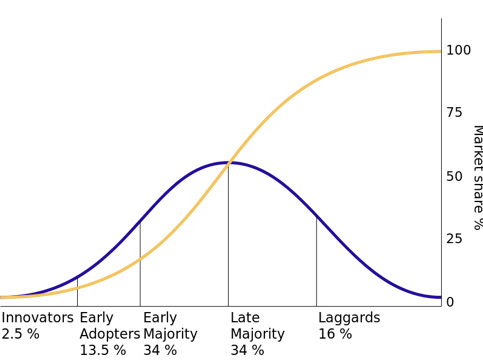 Early adopters can be important to the development of a technology by providing feedback and ideas for improvement before it reaches the “mass market.”

The technology that we are working to adopt itself has its own lifecycle in parallel with the “adoption” curve. This lifecycle is often characterized as a “technology maturity curve” delineating four segments: 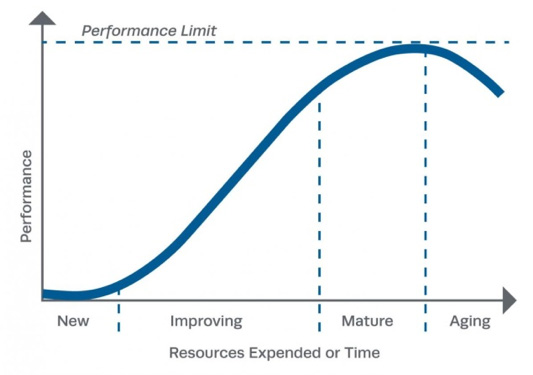 There is an interaction between the technology maturity and the adoption curve, as one might expect by looking at the requirements of each adoption phase “persona.” This means that there is a necessary synchronization between the technology development and the adoption that is possible. The willingness of the innovator and early adopter types to invest time with technology/product developers is a key part of making this synchronization work for everyone. 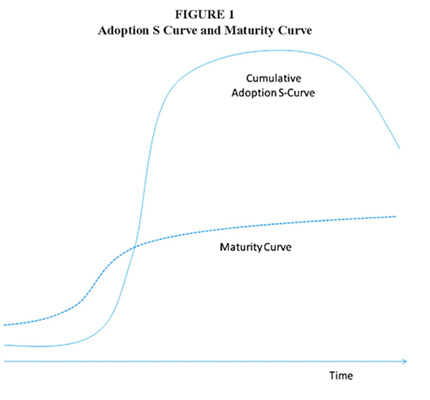 Technology Adoption May Be Changing

These models are, of course, just models, and they may be changing as technology itself evolves and as individuals and companies gain more experience in technology adoption. It has been suggested that the “bell curve” model of adoption has been “squished” toward the early adopter/early majority. The reasoning is that products/technologies entering the market today do so at a more complete and mature level and at lower cost points. Consumer’s having more perfect market information is also seen as contributing to this compression of the adoption curve with the overall effect being that a new technology either gets traction quickly or dies quickly. 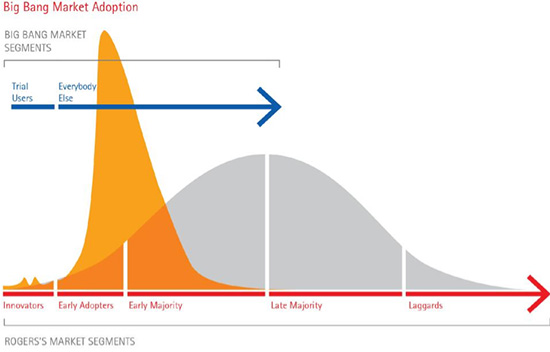 Key Phases of the Hype Cycle Include:

Peak of Inflated Expectations: This is characterized by early publicity that claims a number of success stories, but also often includes many failures (not necessarily publicized). Only early adopters may be engaging with the technology.

Trough of Disillusionment: Across the target users, interest wanes as the technology “fails to deliver.” There is often a shakeout or consolidation among the providers of the technology.

Slope of Enlightenment: More companies start to understand how the technology can benefit them. The technology matures into second and third generation products. Pilots are funded, but many companies still cautious.

Plateau of Productivity: This is where mainstream adoption starts. There are more clear proof points of the technology.

Being aware of how hype cycles work can be important in informing our decisions about technology adoption and timing. 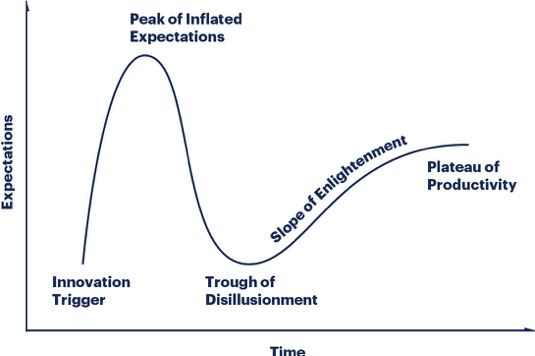 Another model of technology adoption is the "technology acceptance model" or TAM. This model looks at the specific elements of a user’s adoption of new technology. Key to this model are “perceived usefulness” and “perceived ease of use.” Perceived usefulness is the “degree to which a person believes that using a [technology] would enhance their job performance” (i.e., the benefit of the technology). Perceived ease of use is defined as “the degree to which the person believes that using a [technology] would be free from effort” (i.e., the cost of the technology).

An influential Harvard Business Review article remains relevant in outlining the key elements of technology adoption in the enterprise (https://hbr.org/1985/11/implementing-new-technology). We adapt this guidance to the construction market.

The IT or technology or “innovation” group at the construction firm often has the responsibility to develop or select a new technology into the firm, while the users are those who ultimately have to use and accept the technology. Adoption of a “marketing” perspective by the innovation team is helpful in handing off the technology to users by focusing on identifying a fit, preparing the user organization to receive the innovation, and shifting “ownership” of the innovation to the users. The marketing perspective places a focus on user requirements and positioning the technology against likely objections and alternatives, thus aiding adoption. The marketing perspective also focuses on soliciting user feedback during the process and adapting the “offering” based on that.

Lead From The Top, But…

Top management is rightly concerned with the bottom line, and so it is accustomed to having crisp models and data for ROI. In adopting technologies that are earlier in their life cycle, this information can be difficult to gather. This suggests that earlier technologies may be more successfully adopted “bottom up”.

Even if an ROI is accepted by upper management, users must develop “ownership” of a new technology for adoption to be successful. Opinion leaders are important to spread confidence but are not always the best “user” of that particular technology. There are two types of opinion leaders to be considered: “safety” credibility (this person is enough like me to be trusted) and “technical” credibility (this person knows what they are talking about).

There are two reasons for conducting a pilot of a new technology: (1) experience to prove feasibility to upper management and (2) to demonstrate value for other groups in the company. These two purposes are not always compatible.

Technology implementers must be careful to balance these perspectives. If the pilot site/team selected is comprised of the most innovative people in the company, regular users may not view them as credible/typical.

Testing at the lowest performing site/team also poses issues. Other users may view the results as being due to the atypical project and may criticize that “anything would have helped that project.” The key, then, is to be very clear about the specific purpose of each pilot, and then select the project/team in relation to that purpose.

Resistance to innovation often grows out of mistakes or overlooked issues in a new technology. That resistance may grow into sabotage. This often catches the new technology advocates by surprise since they are so sold on its potential benefits. It is a mistake to shrug off the snipers. Instead they should expect opposition. Champions need to nurture support and deal with resistance. This is again a place where the “marketing mindset” may be useful by thinking about how to position the new technology to both accepting adopters as well as reluctant ones.

To kick off the new year, TradeTapp recently released its initial report: the 2020 US Construction Risk Outlook. The report uncovers the biggest risks impacting general contractors and owners in the year ahead, with the goal of helping the entire industry make smarter decisions about risk.