With any transportation project, minimal disruption to traffic is always a key priority. “If commuters and passengers can use the system or roadway during the construction, it’s to everyone’s advantage,” said Jerry Dolly, director of BrandSafway’s Infrastructure Services Group.

In addition, while most roadways are on the ground, some systems—like elevated trains and highways—rise high in the air, crossing over other inhabited areas that also must remain functional and unobstructed.

“The QuikDeck® Suspended Access System has been ideal in these kinds of situations,” Dolly said. “It delivers factory-floor-like working conditions and provides a reliable barrier above water, inhabited areas or other roadways.”

For example, the Shinkansen Bullet Train in Japan includes long stretches of elevated track. “This is one of the primary reasons QuikDeck was selected for a major refurbishment project on this railway,” Dolly said.

The JR Tokai Central Japan Railway Company is investing $7 billion on a major, complex 10-year refurbishment project, entailing a retrofit of 90 miles of the Shinkansen’s elevated track. To provide access to the underside of long stretches of elevated rail bridges, the solution for the project had to have a strong, flat and sturdy platform wider than the overhead structure, and it had to attach without touching anything below.

QuikDeck’s continuous surface contains all debris and eliminates any risk to people, facilities and businesses below from dropped objects. “There are a lot of systems out there, but none that can do what QuikDeck does,” said Dai Ono, the CEO of Nisso Industries, the access contractor for the project.

Another key advantage is that QuikDeck can withstand the extreme wind loads – gusts of up to 170 mph – that are created when the train passes. “QuikDeck can take the wind load. It’s sturdy,” Ono added.

For the Shinkansen project, QuikDeck is being integrated with traditional modular scaffolding. “Because we are able to provide a great work environment, where workers feel safe and have wide-open, flat spaces from which to work, our productivity has been very strong. We can cover yards of retrofit work in just a matter of months. QuikDeck has been critical to the success of this project,” Ono said. 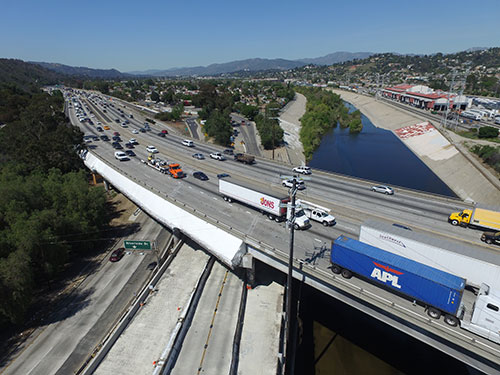 Traffic challenges in the heart of LA

Another transportation project with multiple challenges was the Elysian Viaduct in Los Angeles. Everyone is familiar with Los Angeles’ infamous traffic and road congestion, so when maintenance work was needed on the Elysian Viaduct, a main artery into the heart of Los Angeles, the logistics were complicated to say the least.

A solution was needed that mitigated the effects on commuters while offering flexible, safe and cost-effective access to the highways. Once again, BrandSafway’s QuikDeck Suspended Access System was the answer.

BrandSafway’s Infrastructure Services Group designed and produced “pie shaped” platform segments by using the standard 8-foot by 8-foot QuikDeck platforms against the curved steel girders and then engineered telescoping brackets to connect all the pieces together. The design allowed the scaffold to extend eight feet beyond the suspension point, offering easy access to the outside of the girders for spot-blasting of rust and graffiti. The width, strength and lack of components to create tripping hazards also made the solution safer for workers and reduced the risk of falling objects.

The 10 Heaviest Buildings Ever Moved in the World 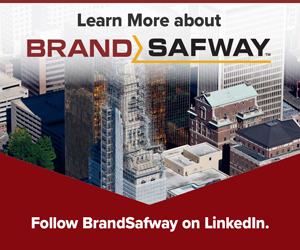 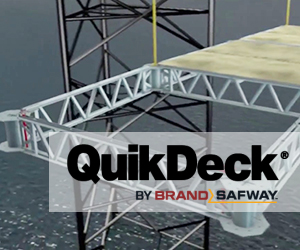 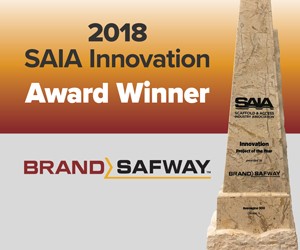